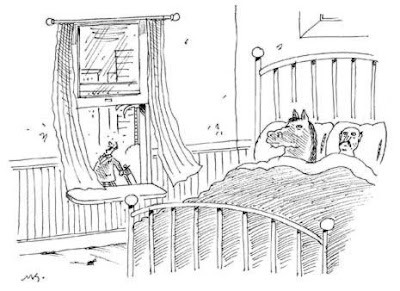 (The Second in a Series)

The world has all but forgotten Ernest Foolish and Leroi Irksome, a cartoonist and writer team who lived in early 20th century Los Angeles. The two had quite different and distinct personalities, and pursued their respective careers separately until a chance meeting in jail brought them together in the spring of 1926. Up to that point, neither had found much success in their chosen fields and had both had turned to petty crime as a means of making a living. Ernest, the cartoonist of the duo, had only a large collection of rejection slips to show for several years’ attempts to get his work published. He drew constantly, but had great difficulty finding words to put into his characters’ mouths. Leroi was a failed writer. One reason for his lack of success was the fact that, try as he might, he was unable to write anything longer than a sentence or two before losing interest. They vowed to collaborate when they got out and when they were released, set up shop in a garage on a bleak stretch of La Cieniga Boulevard. It wasn’t long before they were cranking out the hits. You may remember, “Is that your nose or did you rent it?” And of course who could forget the classic “If that’s your wife, I’m not here!”

Their collaboration didn’t survive success, however. They had a falling out and went their separate ways after only two months of working as a team.

Ernest Foolish was later arrested on morals charges after being discovered in a Burbank hotel room with another man’s horse. He was sent back to jail, where he rotted.

Leroi became addicted to helium and toward the end of his life could be seen staggering through the streets of Glendale, talking to himself in a high-pitched voice and giggling uncontrollably. He died not long after this period, we assume, laughing.